It’s that time of the year again!

Yesterday was the first day of the Berlinale. One of the world’s finest film feasts.

Temperatures were going up  to 10 degrees outside while it should be snowing and icing instead of being sunny and relatively warm.

So the city literally warms up to welcome the stars. It’s the biggest feast of the year, bigger than the Fashion Week, Art week or whatever week you can think of. Berlin and movies, they are simply made for each other.

George Clooney ist auch wieder da! The fact that cinema’s biggest G-spot is in the city is no suprise as he’s coming will be presenting his latest movie “The Monuments Man” .

This movie was filmed partly in Babelsberg, near Berlin (just like Inglorious Basterds to name only one). It’s not that long ago that the city was buzzing with rumours: “Clooney is here, Clooney is here”. He was actually. He was looking for extras for his film to come. He was looking mainly for males youngsters who could play Canadian, American, French or German soldiers.

From what I’ve heard he was always friendly, cordial and above all very professional.

Whenever in Berlin, he stays in the fantastic Soho Hotel, in de Torstrasse just a few blocks away from my apartment.

It’s time to make a little confession here. I respect  G-Man since I first saw him in the American series ER. He played an empathic but troubled pediatrist and had a beautiful love affair with a nurse, played by the incredible Julianne Margulies. (now of The Good Wife fame).

His role was minor but when he was on, he occupied the screen. That is so strange because he’s not particularly handsome, or tall, he doesn’t even have a sixpack like all the other dudes 🙂 But the camera just loves him. His role asked for lots of empathy and this rather good looking guy was just breathing calmness and zenitude.

He left the series for the big screen and hits hard with Roberto Rodriguez “From Dusk till Down”, a trashy horror movie. Excellent choice, because it mad him immediately accepted by the hipster movie people.

That calmness of him is probably only on the outside. I suspect him to be a seriously hyperactive case.

He’s been particulaly touched by the civil war Sudan since a long time and his Satellite Sentinel Project just raised more than a million dollars by organising a contest: “win a date with George Clooney”. A 42 year-young woman won it. It was her first date since 4 years and she shared it with her daughter. (I like that). She went with Clooney to the NY festival on the world premiere of “The Monuments Men.”

And she saw what a madhouse it was. I can easily imagine how fucked up you turn out to be when the world is at your feet. But hey, G. Seems to handle it quiet well.

Here you can see it for yourself.

Clooney is an actor (a good one) and a director (a very good one). One of my favourite movies by his hand is Ides of March but that is probably due to the fact that there’s a certain Ryan Gosling playing a major role. 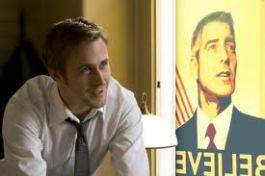 Ides of March featured also Philip Seymour Hoffman, another favorite actor of me, who died last week, probably of an overdose.

Click here to hear  what Clooney and his co-stars has to say about the death of his friend Hoffman on the same day he presented his movie.

That’s the kind of person he is.

PS 2 (February 12, 2014): I just wanted to add this because it’s simply a wonderful gesture: Clooney wears a Vivienne Westwood T-shirt under his tuxedo with the simple message: save the arctic! 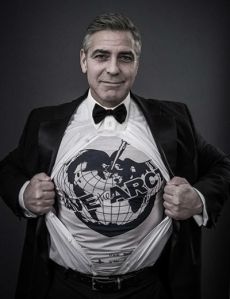